At least 20 people have been killed after two trains collided head-on in southern Italy, say officials.

Dozens of other passengers were injured in the crash, near the town of Andria, some are in hospital with serious injuries.One local official appealed for blood donations and said: “There could still be someone in the wreckage.”

The four-carriage passenger trains, thought to be mainly carrying commuters, collided in the middle of an olive grove in the Puglia region of Italy, a spokesman for the fire brigade said.Police said the accident happened on a single stretch of track between the towns of Corato and Andria.

Reports said rescue workers were pulling victims from the wreckage, including a small child who was alive. Local police chief Riccardo Zingaro said: “Some of the cars are completely crumpled and the rescuers are extracting people from the metal, many of them injured.”

The Mayor of Corato, Massimo Mazzilli, said the scene was horrific and the rescue work was ongoing with firefighters, civil protection officials and volunteers.He said workers had just pulled out a passenger alive and were poised to rescue a second one.

On his Facebook page, he wrote: “It’s as disaster, as if an airplane fell. Rescue workers and civil protection is on the scene, but unfortunately there are victims!” 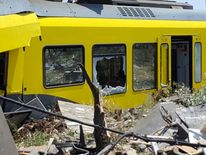 An aerial image showed train carriages derailed and badly damaged by the collision, with debris spread out on either side of the track.The Italian Prime Minister, Matteo Renzi, said the train crash “is a moment of tears”. 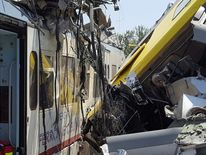 He has cut short a visit to Milan in the north of the country following the accident.

“We won’t stop until we get a clear explanation over what happened,” he told reporters.