Official – Theresah May is the New British Prime Minister

Theresa May has pledged to create “a country that works for everyone” as she took office as the UK’s second female Prime Minister.

Speaking to the world’s press outside Number 10, she said the decisions of her administration would be driven not by the interests of “the privileged few” but those voters struggling with the pressures of modern life.

In an address to the nation outside the famous black door, the 59-year-old stressed her determination to keep the Union between England, Scotland, Wales and Northern Ireland. 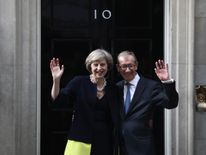 And Mrs May vowed to “rise to the challenge” of negotiating an exit from the European Union and forge a “bold new positive role” for Britain in the world.

Her strongest message was of her intention to serve as a “One Nation” leader acting on behalf of all voters, not just the Conservatives’ traditional supporters.

In a direct message to voters, she said: “I know you are working around the clock, I know you are doing your best  and I know that sometimes life can be a struggle. 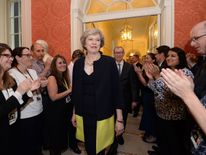 “The Government I lead will be driven not by the interests of the privileged few but by yours. We will do everything we can to give you more control over your lives.”

She then posed for pictures with her husband Philip, laughing and waving for the cameras, before heading inside.

Now Mrs May will begin the work of picking her first Cabinet – and she is expected to choose a record number of women for senior Government positions.

David Cameron formally tendered his resignation to the Queen earlier, which Buckingham Palace said Her Majesty had “graciously accepted” after his six years in power.

The brief audience with Mr Cameron was followed within minutes by the arrival of Mrs May to be appointed by “kissing hands” with the monarch.

She arrived at the Palace by ministerial car, having set off from the House of Commons only after receiving the signal that Mr Cameron’s resignation had been accepted by the Queen and that he had advised her to appoint Mrs May in his place.

Dr. Osei Kwame Despite Set To Establish Own Airline