At least 60 people are reported to have been killed after a truck ploughed into a crowd in an apparent attack in the French city of Nice.

A truck crashed into a crowd of people celebrating Bastille Day in Nice, France, on July 14, with the city’s former mayor saying “tens” were killed in an apparent terrorist attack.

CNN is reporting the occupants of the truck exchanged gunfire with police. It is not known if anyone else was shot.

Photos and videos posted on social media show bodies lying in the street and there are reports of dozens injured. 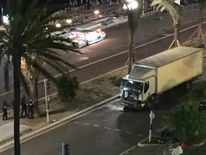 “There was carnage on the road,” he said. “Bodies everywhere.”Local newspaper Le Parisien is reporting that shots were exchanged with police.

“According to our information the driver of the lorry has been killed. A possible accomplice fled the scene,” the newspaper said. 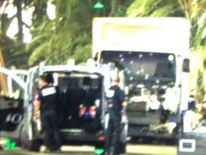 An image appears to show the front of a white lorry riddled with bullet holes.The incident took place as revellers gathered to watch a Bastille Day fireworks display on city’s waterfront.Dramatic footage shows dozens of panicked people running from the scene.

“People are running. It’s panic. The lorry mounted the prom, he drove over everyone,” a journalist on the scene for local newspaper Nice Martin reported.”Everyone is bleeding – there are loads of people injured, without doubt.” President of the Nice Cote d’Azur region, Christian Estrosi, has tweeted: “The driver of a lorry seems to have killed dozens of people. Stay in your homes. More information to follow…”

Guinea’s military junta said on Friday it would not bow to regional pressure and allow President Alpha Conde, detained since his overthrow on Sept....

The UK Government has confirmed that persons vaccinated in Africa, or South America, or countries including UAE, India, Turkey, Jordan, Thailand, Russia will be...

Pastor, His Wife and Friend Die in Fatal Auto Crash