FURIOUS supporters of Donald Trump have condemned an American newspaper after it published X-rated shots of his wife.

A picture of a naked Melania Trump, 46, appeared on the front page of the New York Post yesterday.Further photographs were printed inside the newspaper.Supporters of the Republican presidential candidate branded the move “sexist” and slammed the newspaper for the provocative move.The photos, taken when the Slovenianborn model was 25, show her wearing nothing but high heels and pouting for the camera. 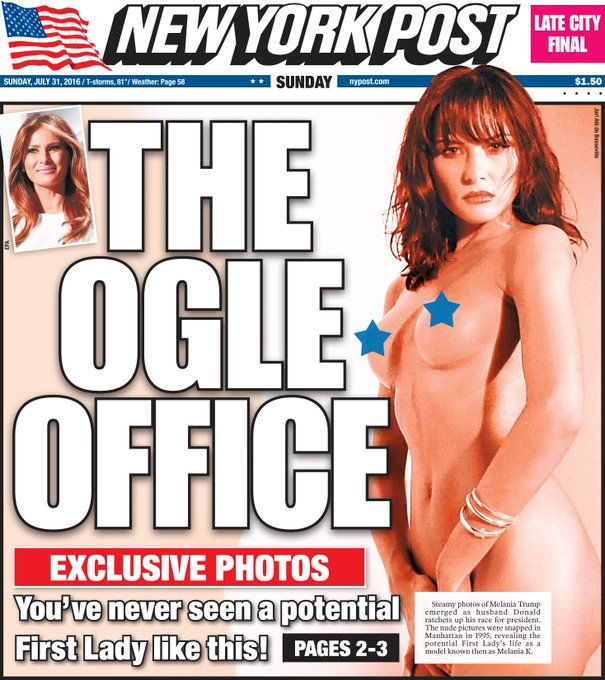 The pictures were shot from the front, back and side.The front-page headline was: “THE OGLE OFFICE. You’ve never seen a potential First Lady like this.”

After the paper hit the streets, Trump supporter and Twitter columnist Tom Mach said: “How dare you stoop so low as to publish nude photos of Melania Trump. What is wrong with you?”

He then tweeted Mr Trump, and said: “Donald – New York Post has just defamed your wife Melania by posting new pictures of her. Will U respond to these sleeze bags?”

Another Twitter user said: “Publishing Melania Trump nude to make a point about her in relation to her husband is a disgusting thing to do.”Former lawyer Rachel Sklar, who has spoken in favour of Mr Trump’s rival, Hillary Clinton, said: “I’m not interested in nude photos of Melania Trump, meant to shame her, ridicule her, and reduce her to an object. Not relevant. Pass.“The lamest, most base and most predictable attack you could ever make on a woman is about her body. Not relevant. Never relevant.”

It is not the first time pictures of the former model in naked poses have caused a stir in America.